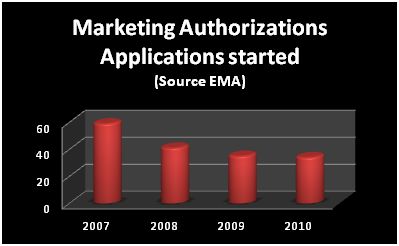 ► Time from discovery to market is still the same since decades : between 10 & 15 years

► Among the 21 NMEs approved in 2010, only 30% come from major Pharmas (annual R&D budget > $2Billions)
Small/medium companies (including biotech) very often lack of specific knowledge and competencies on how to go to Phase I and it is therefore necessary to look for help at the very beginning. Preclinical advice as well as regulatory assistance is highly recommended, it clarifies the milestones in the development and the associated costs.

Before embarking on the way of nonclinical studies, it is worth to plan a meeting with the authorities to:

Meetings with regulatory authorities are often complex to manage, expensive and require in any case a careful preparation.
http://www.ema.europa.eu/docs/en_GB/document_library/Regulatory_and_procedural_guideline/2009/10/WC500004089.pdf

Whether or not you decide to face the meeting, the appropriateness of the development plans should be checked thoroughly for scientific and regulatory compliance to avoid wasting time and money.